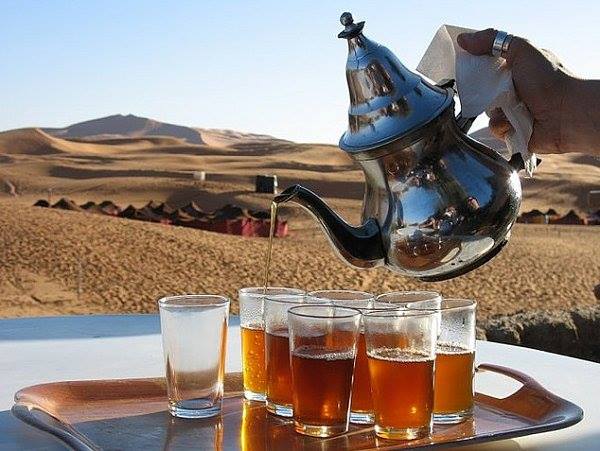 One thing not to miss on your trip to Morocco is trying the iconic Moroccan tea, also known as Moroccan Whiskey or Berber Whiskey, which is unquestionably the most popular drink in the country.

Moroccans consider tea to be an institution and an important part of their society. It can be taken at any time and for any reason; it is a symbol of kindness and gratitude, and we are often welcomed to tea when we reach a house or a shop.

Despite being served hot, tea with mint has a soothing taste thanks to the mint and allows one to cool down. It’s a perfect drink to have after a meal because it aids digestion and lets us regain strength after a long day.

Drinking a cup of tea with good company and having a fun conversation is an opportunity not to be missed. This is a cocktail for getting together and socializing. The best sales are said to be closed in Morocco with a nice glass of tea.

How to prepare Moroccan tea ?

step one: We put a tablespoon of tea in the kettle, to which we add 100 ml of boiled water (we can heat it in a separate container). We let it rest for a couple of minutes, and after that time we make circular movements with the kettle, discarding the water, in order to clean the tea balls. Obviously, if the kettle did not have a filter, we would have to use a strainer.

On this first step, there are two variations: in the first, the process is divided in two, adding a smaller amount of boiled water and letting it rest for a minute, preserving the resulting infusion to add it later (what is called the soul of the tea), and then add boiled water again, moving the kettle and pouring out that water. The other way is to buy tea in leaves (for example, the so-called TAJ 9371), with which we can save on washing. It is your choice on how to make it (the final flavor will depend on it and whether it retains more or fewer properties), but the one that I indicated first is the most common.

Step two: We add to the drained tea between 4 and 6 tablespoons of sugar (it all depends on how sweet you want it) and 400 milliliters of boiling water. We put it over medium heat, we wait for it to boil again. In this step the sugar is very important: incorporating it now, and not at the end, will cause it to undergo a process close to caramelization.

Step 3: We add the mint and reheat for two or three more minutes until we see that it is about to boil again, and we set it aside for 3 more minutes. We make sure that the water does not come to a boil, since peppermint can oxidize, causing bitterness in the tea (there are people who leave it boiling for a few seconds because they like this touch that it provides, I honestly do not recommend it).

In the Final step and in order to mix all the ingredients well, we will fill a glass with the contents of the kettle and return it to it, up to three times. We will also achieve that the entire content of the tea is oxygenated (making it more aromatic) and that the sediments fall to the bottom.

Now all you have to do is serve it in glasses to transport you to Morocco! Remember to pour it from a distance, as if you were professional cider makers, to generate a layer of foam on the surface. And, to top it off, you can add some peppermint to the glass to make it even better!

Some curiosities about Moroccan tea

Moroccan tea is not only intrinsically linked to Moroccan culture, but it is the most faithful icon of its hospitality. Being very common that when we enter a house, an accommodation, or even a business, immediately after introducing ourselves we are invited to sit down to taste it together.

It is always drunk, regardless of the season, and it is always served hot, even in summer or in warmer areas, such as the desert. Moroccans often say that this way thirst is better quenched, which has a certain scientific basis because if we drink cold drinks our body has to make an effort to regulate its temperature, but if we drink them with a temperature similar to body temperature we will not make that extra effort, helping better hydration.

Delving into the custom of serving it hot, if you travel to Morocco, it is most likely that it will be served in a slightly narrow crystal glass. Then they will fill it up to approximately one finger, with the idea that you will hold the glass by the edge so as not to burn yourself.

Although the recipe indicated here is for the most common tea, there are infinite possible varieties, which depend both on the area and personal tastes. The most obvious variation is in the proportion between tea, mint, and sugar, being usual that in the north it is served sweeter and in the south more bitter.

On other occasions, some lemon verbena leaves are added, which not only nuance the flavor but also provide a calming effect. Another way to vary its taste is to add a few drops of orange blossom water and pine nuts, this being the usual way to prepare tea in Tunisia.

Although it may seem that tea has been ingrained in Moroccan history for centuries, in reality, its introduction is quite recent. Specifically, it dates from the mid-nineteenth century when, in an attempt to expand its market, it was imported by English merchants. It was then that the citizens welcomed it, as it helped to soften the hitherto popular infusions of mint and absinthe.

– It is said that tea should be served three times; the first glass being “bitter like life”, the second “strong like love” and the third “sweet like death”.

This gradual change in flavor occurs because the sugar is added at the beginning of the tea making and not in each glass, as is usual in other teas. It is because of this that the more the teapot is served, the more the sugar that falls to the bottom is appreciated. One more example of how an (apparently) simple cultural element can come to reflect a whole philosophy of life.

And now, with these latest curiosities, I dismiss the entry on Moroccan tea, hoping that it encourages you to prepare it at home. To get to know more about Morocco check our Morocco travel blog.